Despite the existence of the principle of energy conservation, matter is constantly changing in the specific use process. During the use of lithium-ion batteries, due to the mutual conversion between chemical energy, thermal energy, and electrical energy, the form of certain substances will inevitably change, so that the capacity that can be effectively outputted during the use of the battery usually shows a gradual decline trend until a certain set "threshold" and the end of life. It is usually defined as the number of full charge and full discharge experienced by the lithium ion battery during the full charge and full discharge cycle under certain conditions when the actual discharge capacity is 80% of the initial capacity. The design of lithium-ion batteries has a direct relationship, which is closely related to the excess capacity factor of the negative electrode.

When defining the number of cycles above, we noticed that the keywords are "under a certain condition" and "put all on", indicating that the number of cycles is limited by many external conditions. For example, the number of cycles of powerwall LiFePO4 battery is usually directly related to temperature, humidity, charge and discharge current, depth of charge and discharge (DOD), etc. At the same time, a situation that cannot be ignored is: when multiple cells of the same type are connected in series and parallel , and combined with a certain technical form of battery management system(BMS) to form a lithium-ion battery pack (PACK), the cycle life of the battery pack is not the same as the cycle life of the battery cell (or single battery). With 51.2V40Ah Powerwall LiFePO4 battery as an example, using CATL's lithium iron phosphate cylindrical battery that can reach 2000 cycles of 1C charge-discharge at room temperature (C is the discharge rate) , through the 16S2P method is integrated, and the number of cells in the battery pack is 32pcs. In this case, the cycle life of Powerwall LiFePO4 battery (under the same temperature and rate) is less than 2000 times. Usually, according to PACK's technology and process, number of cells, structure, heat dissipation, etc. can achieve 70%~85% of the number of cell cycles, which is about 1400~1700 times.

So, how exactly do different conditions affect the cycle life of Li-ion batteries? Below we will give a detailed explanation and analysis. We need to re-understand two basic concepts before starting the analysis, as follows:

1. Definition of state of charge (SOC) and depth of discharge (DOD) and their impact on cycle life

a. State of Charge (SOC, State of Charge): Generally speaking, it is the ratio of the power stored in the battery (the capacity that can be released) to the maximum power that the battery can store. For example, a battery with a maximum capacity of 100Ah is discharged 50Ah after full discharge, or charged 50Ah after complete discharge, then the releasable capacity stored in the battery is 50Ah (regardless of energy damage), and its state of charge is equal to 50/100*100%=50%SOC. Figurative metaphor: a cup with a maximum of 500mL has only 200mL of water in it, and the state at this time is 200/500*100%=40%.

Obviously, the above definition of cycle life refers to full charge and full discharge, that is, the number of cycles for the battery to discharge from 100% SOC to 0% SOC. Simply put, it is the cycle at 100% DOD, also called deep cycle. We refer to cycles with depth of discharge below 100% DOD as "shallow charge and shallow discharge" cycles. The service life of the battery shows a significant upward trend as the depth of discharge DOD decreases, as shown in the following figure: a 12V30Ah battery cycles 500 times at 100% DOD, but exceeds 4000 cycles at 30% DOD. At the same time, from the curve, in the case of the same depth of discharge DOD, the number of cycles corresponding to different SOC intervals is also different. 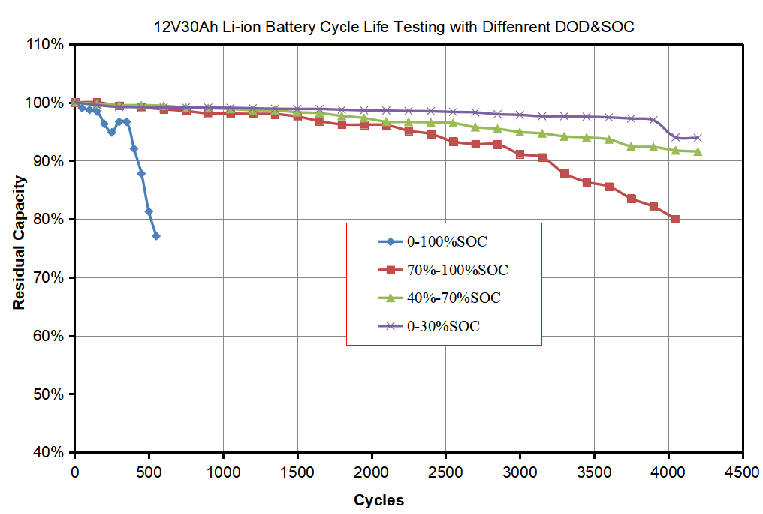 2. Analysis of the influence of temperature on cycle life

b. Usually lithium-ion batteries are not recommended to be charged below 0°C, because as the temperature decreases, the ion migration speed slows down and the reaction rate decreases, which will lead to the process of converting negative lithium ions into metallic lithium during the charging process. The surface of negative electrodes adsorbs lithium metal to reduce the capacity and increase the safety risk.

c. Specifically, as the temperature increases, the number of cycles of lithium-ion batteries presents a parabolic form of "opening down", that is to say, the cycle life of batteries in low temperature or high temperature regions will decrease, and the optimal temperature range is usually 20~30℃ and has a certain relationship with the specific material system.

3. Analysis of the influence of current on cycle life

b. With the development of lithium-ion battery technology, the influence of current on cycle life also changes. In the era of digital products in the past, basically the larger the current, the worse the cycle. However, with the development of power batteries, especially applications such as blade batteries and full-tab technology, the current density distribution inside the lithium-ion battery There is a significant improvement in uniformity, so the effect of current is not very significant. For example, the cycle difference between 0.5C and 1C of the 20Ah cylindrical battery of CATL mentioned above is not very large.

Working conditions of Powerwall LiFePO4 battery: As a backup for energy storage, it is usually not allowed to completely discharge its electricity, otherwise it will lose the meaning of continued use. It is required to maximize the storage of new energy power generation. Most of these application scenarios are full of electricity every day but not used up. In case of rainy days, the remaining electricity can be activated to supply power. Depending on the configuration, it is roughly divided into 2 days or 3 days of continuous power supply, that is, one-third to half of the power is used every day, which is equivalent to using SOC between 33%SOC~100%SOC.

To sum up, the service life of lithium-ion batteries is actually a complex parameter, which needs to be judged strictly according to the actual application environment, especially for some businesses that export household energy storage batteries abroad, they must combine the actual conditions when making guarantee commitments to customers. Comprehensive analysis and rational judgment of the application situation cannot be generalized.

Note: This article belongs to the original article of  PCENERSYS (Shenzhen) Co., Ltd.  All rights reserved. If you want to forward it, please send message to the email: Sales@pcenersys.com